Best of Breed: 5 BOB in Ireland.

Our first Blue Female Great Dane is a beautiful bitch from the Dundesert Kennels,”IR & INT Ch EW 09 Dundesert Chanel Calvin at Leevindane”. We were very pleased to have been allowed to take ownership of her. She is a beautiful bitch with fantastic qualities, she came to the show ring at the age of 4 in April 2007 and between producing 2 fantastic litters of puppies she has managed quite a few wins including 7 Green Stars, 5 Reserve Green Stars, 6 C.A.C.I.B, 6 Best of Breeds,2 Reserve B.O.B  European Winners Title 2009 and Crufts Qualification 2010 taking VHC (5th) in her Veteran class at Crufts 2010. Chanel was Reserve Best in Show at the Irish Great Dane Club 2010 Champ Show. Chanel is now 11 years 5 months old retired from Showing and in good health.

We were absolutely delighted when Chanel was awarded Best Blue Female Great Dane at the Irish Great Dane of the Year CH SH 2007, beating her sister Danika (winner 2006). This was Chanel’s first entry in a CH Show.

Chanel did not compete in the 2009 Dane of the Year Show as we unfortunately had other commitments , however she had the European Winners CH SH the following day in which Chanel took BOB, Green Star & CACIB, Qualified for Crufts 2010 and also gained the title of European Winner 2009 (EW09).

Here at LeevinDane we are delighted that the Dundesert Kennels allowed us have Chanel and that they also agreed to allow us to breed from her, and we know they are over the moon too that Chanel made Champ in 2012.

That’s our Foundation Girl!!!
Forever in our hearts ,we love you to pieces Chanel xxxx

We then added the wonderful Black Beauty “Rayjen Old Rosebud at LeevinDane” to our family in May 2008. We thank Ray & Jeanette Park for allowing us to have Beauty. Beauty comes from American Bloodlines & is a fantastic specimen of the breed. She has provided us with three fantastic litters to date and is mum to “Mr Cole” 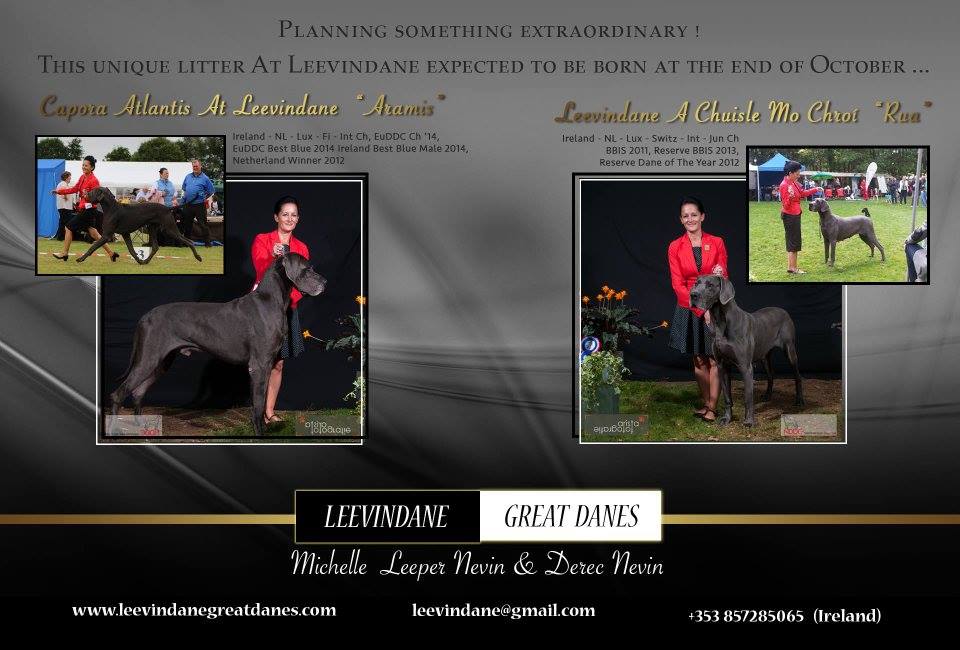 The First Female Irish Great Dane to be EuDDc tested and approved.

The Rayjen Kennels allowed us to use Sid “Rayjen Best Mate” their fantastic blue male as a stud dog to our Chanel on her second & final litter in June 2009. This produced a fabulous litter of five blues & we found it very hard to choose from a fantastic litter as they were all so lovely. We finally picked a female & named her Rua “LeevinDane A Chuisle mo Chroí”.

We started showing Rua in Dec 2009 she was Crufts Qualified 2011 where she was placed 3rd in Yearling at her first Crufts & is now Qualified for Crufts having received her Stud Book number. Rua was also awarded Best Blue Female at the 2009 Dane of the Year Show in April 2010 aged just 10 months old, beating her mum Chanel who had won it for the previous few years. Rua was also awarded Best Overall Blue Dane 2010 at the Dane Of the Year in April 2011.

“Rua” is the daughter of our foundation bitch “Chanel” IR Ch and INT CH Dundesert Chanel Calvin At LeevinDane (EW’09). Rua has a fantastic temperament just like her mums and is very loving & obedient.

Rua was also awarded Best Blue Female at the 2009 Dane of the Year Show in April 2010 aged just 10 months old, beating her mum Chanel who had won it for the previous few years.

Rua has also won CAC CACIB and BOB at the Eindhoven International show in February 2013 gaining her 4th CACIB on the way to her International Ch Title.